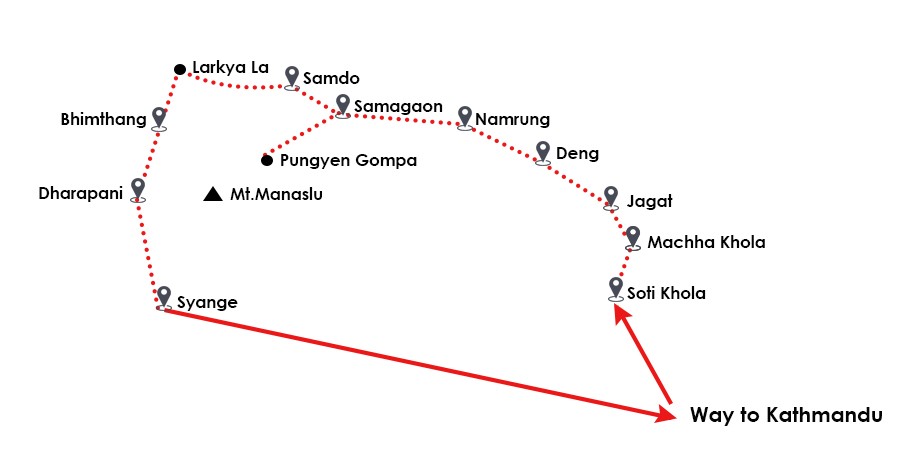 Arrival at Tribhuvan International Airport, Nepal. Upon completing the visa formalities and collecting your luggages in the airport, kindly proceed to the exit of the arrival hall. Your trip leader will await you just outside the arrival hall and will escort you to your hotel in Kathmandu. Please look out for a placard of Highland Expeditions at the exit of arrival hall. Welcome drinks will be served and after you’ve refreshed, your trek leader will brief you about your trip in the lobby of your hotel in the evening. Get familiar with your surroundings by taking a walk down the street

After an early breakfast, we set out on a guided tour to the primary historical spots in Kathmandu. We will tour symbolic monuments, temples, monasteries, palaces and UNESCO World Heritage Sites that include: Boudhanath, and the temples of Pashupatinath. As we stroll along the exotic locales of Kathmandu, more diversified cultural settings in the valley welcome us with warm hospitality. At Boudhanath, one of the biggest stupas in Asia, we get deep insights into Buddhism. This may invoke your spiritual senses. There will be a brief orientation followed by trek preparation during late afternoon at the hotel lobby.

After breakfast, it’s an early drive today for Sotikhola. In the course of the drive, we enjoy views of Nepal’s colorful rural landscapes along with the mountain scenery that’s evident throughout our journey. We will be driving on a well tarred road from Kathmandu to Dhading Bensi, district headquarter of Dhading (1050m) but the drive from Dhading Bensi to Arughat will be on a roughshod road. On reaching Arughat, a major town in the region, we drive further down to Sotikhola.

The land seems to change as we hike on, the broad valley narrows and at some places the trail is slit into the steep valley sides, which has thick foliage forest. We pass a few dotted small villages, tucked into the hillside, until we reach a widening of the valley, opposite the point where a large branch stream enters the Budhi Gandaki River. The terraced farmland here belongs to the village of Lapbesi. We descend once again to the wide, sandy riverbed and follow a route which runs below the steep, rocky valley side. At length, we have to climb up once again on a trail to Machha Khola, a settlement which has a number of teashops.

The slender trail makes some minor ups and downs and eventually crosses the Tharo Khola, reaching Khorlabesi. After some ascending and descending we come across a small Hotspring in Tatopani. From the hot spring, we climb over another ridge, then cross the Budhi Gandaki on an airy suspension bridge. At this juncture, we climb on a wide, well-crafted staircase, then across a landslide and over a ridge to Dobhan. Upon crossing a suspension bridge over the Yaru Khola, we climb the stone stairs and then drop to the river and again climb more stone stairs to Tharo Bharyang. Crossing the west bank of the Budhi Gandaki, we climb over a ridge, trek along the river and then climb towards the village of Jagat.

After descending a chain of stone steps to the river, we climb a terraced hill to Saguleri, from where we can see the impressive Sringi Himal (7187m). The path splits, with the right-hand branch heading off towards the Ganesh Himal while crossing the river at Gata Khola. Our route continues upstream, through a gorge with tall walls. We cross the river thrice in the next two hours to avoid difficult valley sides and then climb up over a further steep spur to reach the village of Deng.

After a short walk beyond Deng, we cross the Budhi Gandaki and climb to Rana at 1910m. From the bridge, we climb a bit to join a trail from Bhi, then head west up the Budhi Gandaki valley. The trail also passes through forests and mani where we turn towards a corner that contours to Ghap. Despite an alternative route, we take the route through Prok village. Prok village has a viewpoint for a beautiful sight of Siringi Himal. We further cross the Budi Gandaki several times today and come across several gompas en route. The trail follows the river upstream through a dense forest. After crossing the river at an impressive spot where it gushes down a narrow gorge, the forest becomes less dense and the trail is all right again. The pleasant walk continues and after a last steep climb we reach Namrung.

On leaving the village of Namrung behind, we follow the right bank of the river, with views of Peak 29 ahead. As we continue on the main trail, we soon reach the fields of Sama Gaon, 3500m. We reach Sama Gompa, 20 minutes beyond the village and Samdo, which is close-up to the Tibetan border.

This is a day to chill out at Samagaon for rest and acclimatization. It’s good for our bodies. Today we get to discover some interesting things about Buddhist culture. We enjoy the sight of thousands of mani stones with Buddhist texts and pictures and women clad in traditional clothes and ornaments. On a little hill near Sama village is an old Gompa (Pungyen Gompa), a monastery with great views of the glacier. It is named after Manaslu; Pungyen means bracelet, a good description of the two peaks. It was destroyed a year after the first unsuccessful Japanese attempt to climb Manaslu. The locals believed that the climb angered the gods, and when the Japanese came back a year later they met with a lot of resistance that they had to give up their attempt. They were finally successful in 1959.

After breakfast we begin our day by descending to the Budhi Gandaki River, that has turned north and follow it to a bridge over a side stream. The trail to the left leads to the Manaslu Base camp. The Larkya la Trail passes several mani walls as the valley begins to widen. It is an easy trail on a shelf above the river passing juniper and birch forests of Kermo Kharka. We drop off the shelf, cross the Budhi Gandaki on a wooden bridge and climb steeply onto a headland between two forks of the river. From a stone arch we can view a large white kani. Finally passing through the kani we reach the village of Samdo

This is another day to acclimatize your body for the thin air as you go higher. It’s important that your body blends in with the heights as this will prevent mountain sickness of any kind; perhaps what’s more essential is you will feel more comfortable at higher altitudes. We have two options today. The first option we much recommend is a hike up the valley directly at the back of Samdo village. This walk will take us to one of the trade passes to Tibet for excellent views of Mt. Manaslu along with other Himalayan peaks that include Simrang, Hiunchuli, Ngadi, Larkye Peak, Cheo and possibly Kusum Kanggaru behind the pass. En route to these vantage points we pass many seasonal herding settlements called doksas and will get to see some beautiful mountain birds like the Lophophorus (the national bird of Nepal), Lammergeyer and Himalayan Griffin soaring high above us. The 2nd option for today could be a trip to the Gya La ('large pass') to the north of Samdo, a more often used trading route to Tibet. But, this is a rather lengthy hike (almost the whole day) and may tire us out of our boots.

The thundering Budhi Gandaki river trickles to a stream as we cling to its course as hike high up. This rewards us with amazing mountains from all sides. Manaslu stands in a league of its own. After crossing to the east bank of the river, we reach the last permanent settlement in the valley, which is called Sumdu. High Above the village we cross a stream, which runs down from the Gya La (Pass), the pass to Tibet. We come to the wreck of an abandoned village, known as Larkya Bazaar. We assume this village thrived as a trading point, with Tibet lying over the Gya La. The exchange seems to have dried up leading to the migration of the settlers. Nearing the Larkya Glacier, we reach a lodge at 4450m, which has been built to cater to travelers crossing the Larkya La.

After a brief climb, we reach a glen on the north side of the Larkya Glaciers from where we can enjoy great views of Cho Danda and Larkya Peak. Finally, we walk across moraines of the glacier, making a gradual ascent which becomes steeper only in the last section of the pass. From the pass, there are fantastic views of Himlung Himal, Cheo Himal, Kusum Kangguru and the huge Annapurna II. It is a pretty lengthier day than usual to Bhimtang, but to walk into these lower pastures with the eventide fog setting in and with Mt. Manaslu looming close by is an irresistible experience to remember

Today, from a crest at Bimthang, we get to savor lovely views of Mt. Manaslu, Lamjung Himal, Himlung Himal and Cheo Himal. We descend further and cross a high meadow (Sangure Kharka) followed by a bridge over Dudh Khola. We walk through rhododendron forest and follow a trail through a narrow valley until we reach the highest cultivated land of the valley at Karche, at 2785 meters. We pass across fields before making a steep climb over a ridge. The trail comes off the ridge in a big, sweeping circle to a river bank at 2580m. A brief distance beyond is the village of Gho

We climb over a small rim and take pleasure in the stone paved trail as it passes through a charming colorful village. We then cross the bridge over Dudh Khola and climb up through a chorten-shaped arch, pass a mani wall and reach Thonje village. At the village, we pass through a police checkpoint and continue to Dharapani. In case we are not aware; we have just entered the Annapurna Circuit route from Dharapani. Lunch stop at Dharapani and afterwards we catch our jeeps and drive to Besisahar for our last night on trek

After our breakfast, we bid farewell to the mountain and drive to Kathmandu. The total journey from Besisahar to Kathmandu will be 6-7 hours drive and we expect to reach Kathmandu by late afternoon. Lunch stop will be along the way and after reaching Kathmandu, it’s a free time.

Thank you for joining us on this trek and it has been a pleasure getting to know you during this time. We hope this venture has enriched your experience with happy memories. Keep in touch and hope to hear from you soon. Bon voyage for a safe and pleasant trip home.