Lukla airport known as Tenzing Hillary Airport has been known famously around the world as the world’s most dangerous airport. But what makes it dangerous and should you be afraid of flying to Lukla? Find out the facts, stats and tips for the Lukla flight below:

The Flight to Lukla:

Early morning at Domestic terminal at Kathmandu’s sole airport (Tribhuvan International Airport), trekkers and climbers from around the world wait anxiously for what could be their most thrilling flight. Passengers are checked in, baggage is weighed and as the tower gives clearance for the flights to operate, the flight begins taxiing to the end of the runway for take-off. There is no turning away from the flight at this moment and soon the flight takes off from Kathmandu airport orienting eastbound for 30 minutes. After few minutes of taking off from Kathmandu airport, the flight leaves Kathmandu valley and on the left side of the aircraft, the Himalayas appear. Throughout the flight, you will be rewarded with the scenic mountain view.

Your journey to Everest has now officially begun with a spectacular flight to Lukla. During the flight, the views of Langtang and Rolwaling mountain range are breathtaking. The 30 minutes on board the flight could be the longest 30 minutes of their life for many people. Soon a village perched at the hill appears out of the blue and as the pilot orients the flight towards it, a track comes visible and you realize that’s the RUNWAY where you will land in the next minute. On the approach of the runway there is a sheer drop of 2000ft and at the end of the runway is a huge wall. The pilot carefully aligns the flight with the runway path and soon the flight hits the tarmac of Lukla airport. You have now landed at Lukla airport.

Lukla airport known as Tenzing Hillary Airport is situated at an elevation of 2846m/9337 feet above sea level at Lukla, Solukhumbu District, Nepal. It is known as a gateway to the Everest region, the world-famous tourist destination. The airport was built in 1971 with the help of Sir Edmund Hillary. Lukla airport is the busiest STOL airport in Nepal. During peak season time, an average of 30 flights is conducted every day.

Lukla Airport or Tenzing Hillary Airport is perched on the side of a mountain with a confining nature of the terrain surrounded by mountains. The runway is 527m/1729 feet long with 12% gradient to slow down landing aircraft and gives a speed boost to aircraft taking off. There is a 2000ft sheer drop at the end of a runway during take-off and a high terrain immediately at the end of a runway during landing. The airport has an only parking capacity of 4 aircraft. 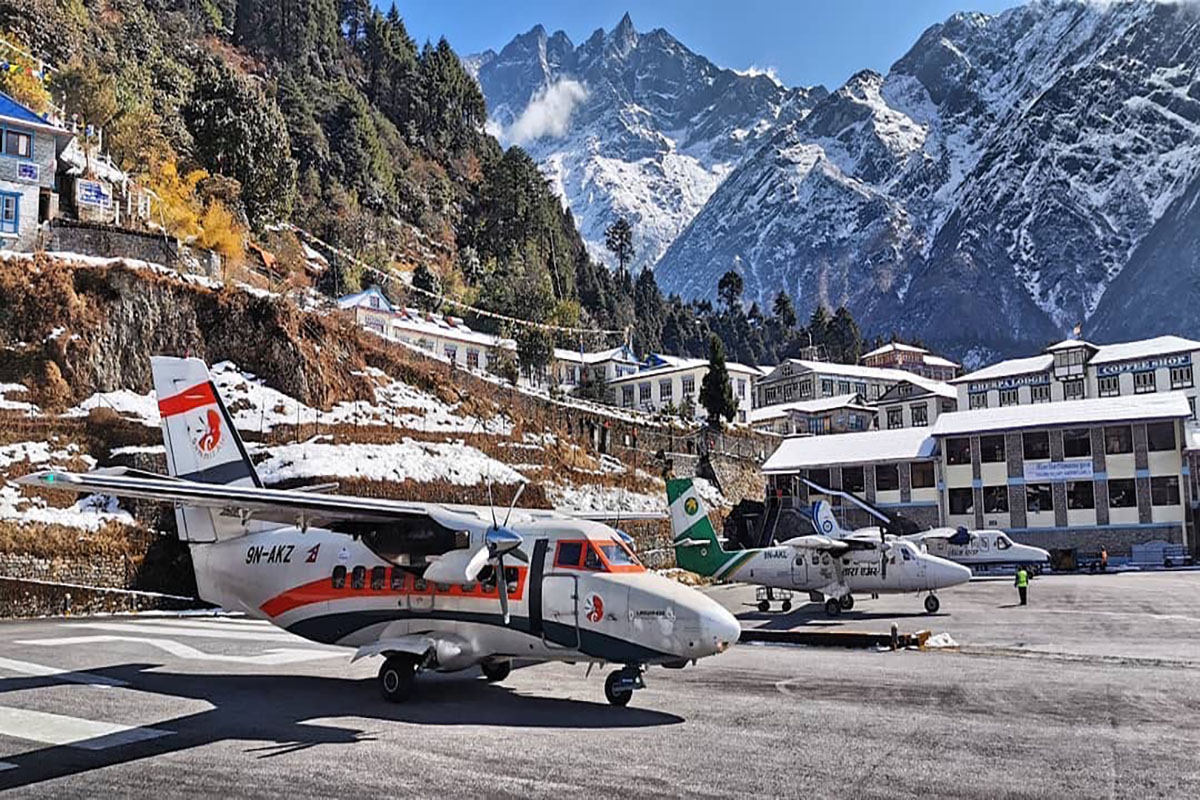 Although the serviceability of the airport is all-weather, the weather at Lukla airport deteriorates very quickly due to its high mountainous location. All Lukla flights are scheduled very early starting at 6:00 am as the clouds start to build up during the afternoon. From Kathmandu airport, the flight time is around 35 minutes navigating through high mountains, due to which all flights are conducted with a Visual Flight Rules (VFR).

11 accidents have been reported for Lukla flight since the establishment of Lukla airport, killing over 30 passengers and crew. The most fatal accident was on 8 Oct 2008 when an aircraft belonging to Yeti Airlines crashed on final approach killing eighteen passengers and crew on board. Due to the bad weather conditions and heavy fog, the aircraft came in too low and crashed short of the runway. Since this accident, the airport has stepped up extra measures to prevent such accidents. The latest accident was on 14 April 2009, a Summit Air Let L-140 TurboLet aircraft with no passengers on board veered to the right of the runway while taking off and smashed into a parked helicopter. The first officer aboard the flight and a police officer standing near the parked helicopter died in the crash.

Due to its short runway, confine terrain of the airport and a sheer drop of 2000ft at the approach of the runway, the Civil Aviation Authority of Nepal has set a high standard for pilots flying to Lukla. The pilots must have completed at least 100 STOL missions, have over one year of flying experience into STOL sectors of Nepal and completed 10 flights to Lukla with a certified instructor pilot. The pilots operating Lukla flights are highly skilled

Only STOL aircraft and helicopters can only land at Lukla. Currently, 3 airlines are conducting regular flights and Nepal airline conducts flight too on an occasional basis. The aircrafts used in Lukla sector are Twin Otter, Dornier, L-410 turbolet and Pilatus Turbo Porter aircraft. Lukla airport has the busiest helipad in Nepal conducting sightseeing flights, passenger flights and rescue flights. During the peak tourist season, there are helicopters on standby at Lukla airport for emergency purpose.

Alternate if you don’t want to fly to Lukla:

For those who want to avoid the Lukla flight and yet want to embark on a journey to Everest. They can choose to drive to either Jiri or Phaplu. From here you will need to trek for 3-4 days to reach Lukla. The flight is only 30 minutes but if you choose to avoid the flight be prepared for 12 hrs drive and 3-4 days trek to reach Lukla. Another option will be to take a helicopter flight to Lukla. A helicopter is considered generally safer as compared to aeroplanes due to its manoeuvring capability and low visibility requirement. You can either charter a helicopter to Lukla which will cost USD 2500-USD 3000 per flight or join the flight on sharing basis which can cost from USD 400-USD 800 depending on the number of passengers on board the helicopter flight. The helicopter can take 5 passengers at one time to Lukla.

As of April 2019, the Civil Aviation Authority of Nepal has directed all the airlines to operate the Lukla flight from Ramechap airport instead of Kathmandu airport. This new change has been made to avoid traffic congestion at Kathmandu airport. Kathmandu airport is the only international airport in Nepal and has only one runway, which is used by both international and domestic flights. Due to the high number of flights on Lukla, all Lukla flights during peak season period (Apr-May and Oct-Nov) are operated from Ramechap airport. The flight is only 12 minutes from Ramechap airport and also the chances of flight cancellation due to poor weather are very slim. From Kathmandu, it takes around 4 hrs drive to reach Ramechap. However, if the number of flights is low then the airlines may operate the flights directly from Kathmandu too.

So, should you be afraid of flying to Lukla?

During the season time, there are about 30 flights every day on average with nearly 400-500 tourists arriving and departing. Annually over 30,000 trekkers and climbers enter Everest region. The airport has also stepped up extra measures to prevent any accidents. Landing in bad weather conditions is strictly restricted. The runway at Lukla airport has been installed with the approach lighting system. While the Lukla airport has several incidents as compared to other airports, the accident ratio is very low and we can consider it pretty safe to fly. Last, the pilots operating Lukla flights are considered among the best.

By Highland Expeditions on April 15, 2020 in Flights & Airports